The project area is situated on the Gabbro contained in the Wateranga layered ultramafic intrusive complex and another un-named separate but almost contiguous nearby Gabbro. The Wateranga Gabbro is dissected by the Burnett River thus creating a northern section, upon which the Central MLA is situated.

Unlike gold and base metals, these deposits exhibit a layered sequence and are relatively uniform in their distribution and nature. This is caused by lateral weathering of the underlying gabbroic host rock. The resulting alluvial, colluvial and eluvial material derived from weathering generally reflects the mineralogy of the host. For economic viability, these deposit styles depend on mineral quality and surface visibility.

The widespread nature of the visible mineralisation, the results of the assays and petrology tests from the various drilling and sampling programs together with the known geoscientific evidence from previous exploration data and the known extent of the underlying gabbro are sufficient to allow a reliable and systematic estimation of the ore potential, particularly in the Central area and in the area south of the Burnett River.

All resource estimates have been undertaken by Semple Geological Services Pty Ltd and carried out by its principle, Mr David Semple, a duly qualified independent geologist. The resources have been calculated by Mr Semple in accordance with the Australasian Code for Reporting of Mineral Resources and Ore Reserves 1999. The following extract has been taken from the Information Memorandum on Proposed Industrial Minerals Mine (HTL, July 2004):

Zircon occurs as a minor by-product at 0.2% and equates to approximately 284,000 tonnes. Corundum is also known to occur in significant amounts at up to 18 kg per tonne. Rutile has been assayed at up to 0.46% and averages 0.1%.
The above identified resource is sufficient for a mine life in excess of 30 years at an annual production rate of 4.5 million tonnes, with the potential to radically expand production to whatever circumstances warranted. However only approximately 30% of the known mineralised section has been drilled and the final Ore Reserve figure, for the unconsolidated section, is expected to exceed 200 million tonnes down to an average depth of 4.5 metres.

In addition to the above Resource/Reserve Wateranga has an Inferred Resource of approximately 84 m/t grading 20% Feldspar, 4.3% Ilmenite, 10% Mica, 0.8% Apatite and 30 ppm Scandium. This brings the total Reserve and Resource, in the unconsolidated section, at Wateranga to 225 million tonnes with a grade of 4.8% Ilmenite, 20% Feldspar, 12% Mica, 0.8% Apatite and 30ppm Scandium.” 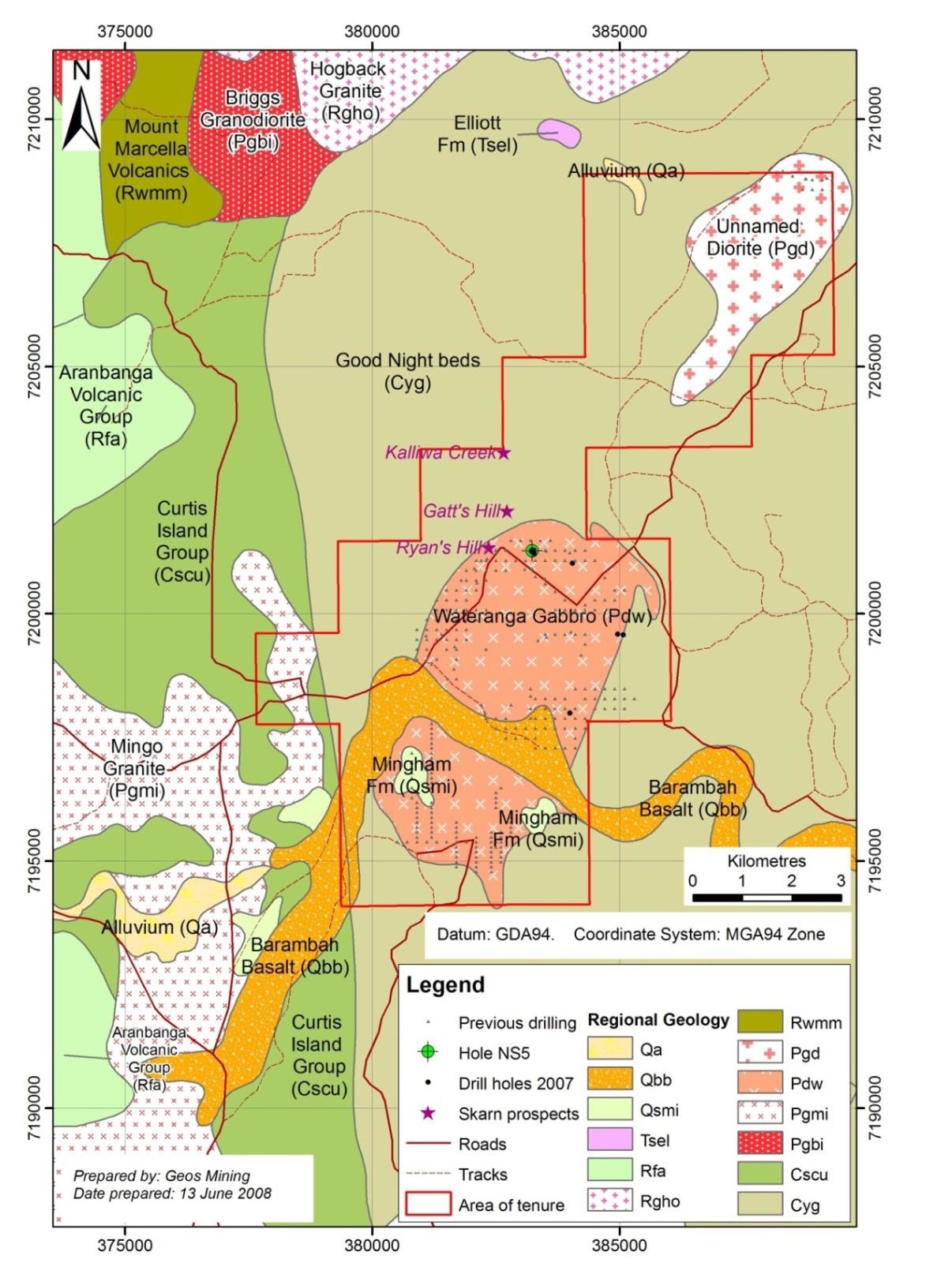 “The hard rock section immediately below the unconsolidated section in what is now the northern part of the Wateranga Proven Ore Body has been tested with Diamond Drill Hole NS5. This hole was open hole without sample between 0 and 21m, and between 21m to 38m assayed 4% apatite and between 38 m and 56 m assayed 11.2 % apatite. Grades averaging 15% ilmenite were received in the same interval 21 to 56m. It is anticipated that, upon the commencement of mining of this section of the hard rock, Wateranga will produce, an additional 200,000t of Apatite, 150,000t of Ilmenite and 600,000t of High Alumina Feldspar per year. In addition to the above Hard Rock resource, the central core of the Wateranga Gabbro outcrops as a ridge 120m above the eluvial surface. This ridge is 1600m in length and averages 600 m in width. Surface sampling of this outcrop as well as diamond drilling of the gabbro has outlined an Indicated Mineral Resource for the hard rock deposit of 345 million tonnes with feldspar ranging in grade from 17% to 70%. The average recovered grade is 34.3% feldspar.

These grades are higher than the feldspar grades found in the eluvial deposits and equate to 111 million tonnes of Feldspar. Ilmenite grades, in this section of the Hard Rock, are lower than in the eluvial deposit, this hard rock returning 1% ilmenite and 33ppm Scandium. This area has not been assayed for Apatite or Mica at this stage although visual estimates of the Mica content are similar to the 10% assayed elsewhere in the deposit.