A major Iron Ore mineral used as a feedstock for steel production. Also used as a heavy medium in the coal washing

Used in the ceramics and chemical industries, it is also, increasingly, being used in the manufacture of high strength alloy.

A natural source of phosphate for phosphoric fertilizers and animal feed. Demand for natural agricultural products

Is with the exception of diamond, the hardest mineral known and is used as a high quality abrasive

Is the most abundant of three naturally occurring forms of titanium dioxide. Commercially important titanium mineral

The Wateranga project covers an area of approximately 8,038 hectares and is located approximately 80km southwest of Bundaberg, in south east Queensland. The focus of the current economic interest is an eluvial resource derived from weathered gabbro, which contains valuable minerals. The main focus of the project is ilmenite, but other potentially valuable minerals include feldspar , apatite, mica and zircon.

Mining Lease ML80116 of central target area has been granted in 2018, and the project is moving to production stage.

HTL develops steadily since the company established. Creating long-term shareholder value is always HTL’s priority. We commit to work in ways that are consistent with our values of integrity, performance and teamwork. HTL board members believe that as Wateranga Project will gradually move into production stage from 2021-2022 financial year, HTL will become emerging force in the industrial minerals industry, with supplying Australian and International market ample amount of high quality industrial minerals in the following 30 to 40 years. Meanwhile to accomplish HTL’s ultimate mission that is to output long-term values to shareholders, employees and local communities.

Investment, Mining and Offtake Agreement has been executed (15/07/2020)

The board of HTL is pleased to announce that the Investment, Mining and Offtake Agreement has been executed between HTL and its strategic investor. The investor has extensive and successful experience...

The Board of Directors of High Titanium Resources and Technology Ltd (HTL) and Queensland Industrial Minerals Pty Ltd (QIM) today is pleased to advise that the Mining Lease 80116 covering 1497 hectare...

The Wide Bay Burnett Resources Group(WBBRG) meeting was held online on 25 August 2020 due to the COVID-19 pandemic. As initial member of the regional group formed by state departments, local councils, mining companies and industrial experts, HTL reported the progress of the company including the recent execution of Investment, Mining and Offtake Agreement. As one of the most advanced developing resource project within the region, HTL plans to kick off the project in early 2021. With new policy and government fund to be introduced to stimulate the regional economy growth, HTL believes that the success of Wateranga Project will contribute to the recovery of regional economy.

HTL is further establishing a cooperative relationship with an European based company that intends to finance HTL’s mineral sand project and also offtake part of ilmenite product. Both parties have signed MOU of offtake and investment , are willing to move forward to establish comprehensive cooperation relationship in the near future. The HTL board believes the potential cooperation will reinforce the set objective in terms of diversifying the market to reduce the risk.

State Government were going to fund $5M dollars for the John Peterson Bridge on top of the $20M that the Federal Government had already committed. This bridge upgrade is an action of boosting regional economy and industries and businesses around will benefit from it, including our Wateranga Project.

Market research from FerroAlloyNet.com has shown monthly comparasion of ilmenite imported by China from January to May 2020 and same period in 2019. We see 41% increase in total of this period although global economy was affected by COVID-19 this year. 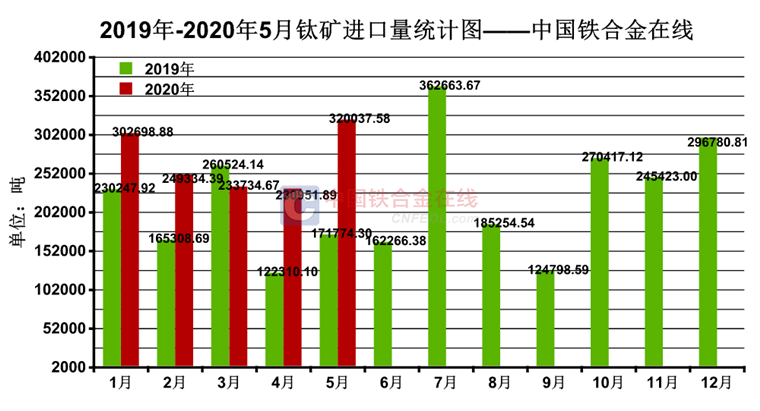 According to HTL’s first-hand market research, China’s ilmenite market has gradually stabilized this week, and the pre-tax FOB price of imported 50% TiO2 ilmenite has increased to US$270/ton.

Please fill in the form below if you have any comments or questions concerning this site or HTL. This will automatically send a message to our preferred email address: